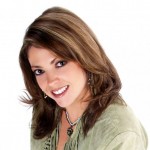 We are so thrilled to welcome author Jamie Carie to Regency Reflections! Jamie, the author of the Forgotten Castles series, has stopped by to tell us a little bit about her upcoming release, A Duke’s Promise, which will be available September 1st.

Jamie is kindly offering a free book (Paperback or Kindle download) to one lucky visitor!  For your chance to win a book from the Forgotten Castles series, leave a comment on this post.

1. Tell us a bit about the inspiration behind your Forgotten Castles series.

It started with the idea of doing something similar to my second book, The Duchess and the Dragon, but with a Regency spin. I love writing about royalty from that time period! I also knew I wanted something adventurous with a mystery to solve. Then the characters took over, which is the best part.

2. Setting plays a very important role in this series.  Can you tell us what drew you to using castles in your setting, and more specifically, how you tied the setting to the time period?

I had the idea of three I’s – Ireland, Iceland and Italy as the settings. Each book takes place in one of those countries and features tucked away, crumpling and forgotten or fairy-tale like castles. I had a moments panic when I discovered that Iceland doesn’t have any actual castles but then I discovered the Dimmuborgir, black lava formations that look enough like a castle that they are called the Black Castles of Iceland. It was perfect for a creepy scene!

How I tied the setting to the time period? Having Alexandria grow up on a very secluded island in an old, crumpling castle gave me more leeway with her behavior in Regency England. She couldn’t be expected to be quite so strict in her role as a woman of that time because she was never taught the rules of society and hadn’t lived among the elite until she meets her guardian, the duke, and lives for a time in London. It was fun to see how she changed and grew over the course of the three books.

3. The book covers in the Forgotten Castle series are stunning.  Can you tell us about the design process?

Thank you!! I have to give all the credit for the gorgeous covers to Diana Lawrence, Art Director at B&H Publishing. Diana always gets the “feel” of my books and carries it so well to the cover designs. I only consult and there were very few changes that I recommended. Here’s the link to the making of the first cover – The Guardian Duke.

4. Tell us a bit about your upcoming release, A Duke’s Promise. 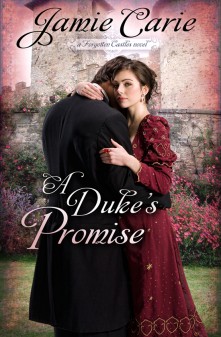 I am so excited to have A Duke’s Promise come out in September! God gave me an ending that took my breath away, tying up all the details and answering all the questions that are raised in the first two books. I can’t give anything away, so here is the back of the book blurb:

From the Land of Fire and Ice back to England’s shores, Alexandria Featherstone finds herself the new Duchess of St. Easton. Her husband has promised a wedding trip to take them to the place where her imperiled parents were last seen — Italy and the marble caves of Carrara — but a powerful Italian duke plots against Alex and her treasure-hunting parents. Hoping to save them, Alex and Gabriel travel to Italy by balloon. Fraught with danger on all sides and pressured by Gabriel’s affliction to the breaking point, they must learn to work and fight together. The mysterious key is within their grasp, but they have yet to recognize it. This journey will require steadfast faith in God and each other — a risk that will win them everything they want or lose them everything they have.

5. You have an amazing ability to weave the details of everyday Regency life into your novels.  If you had to pick, what would you say is your favorite aspect of Regency life?

I love the gallantry of the men of that day and age. Men (the good ones at least!) were very protecting toward their mothers, sisters, wives and daughters. Gabriel, the duke who is Alexandria’s guardian, takes very good care of his family (even though some members drive him bonkers). He treats Alexandria like a princess. I love how he loves her – tender, sweet, hot, completely besotted but not a dolt – sigh! I think he is my favorite hero to date!

6. What do you think is the biggest challenge of writing a Regency?

Probably getting the “feel” (the cadence of the language and dialog, the perspectives of the characters, etc.) of the time period. I suggest reading lots of Regencies and absorb the tone before trying to write one.

7. Do you have a favorite Regency author?

I’m a preacher’s daughter. I grew up in Vincennes, Indiana and my entire childhood was immersed in the Charismatic movement with Bible teachers like Derek Prince, Kenneth Copeland and many others sounding by cassette tape in the background. This upbringing was both wildly crazy when it came to some of the error of that movement but also deeply theological and Bible based. I’ve had a lot to sort out as an adult, I can tell you! I think God has used all this in my writing and I’ve learned to be thankful for it and proceed with the faith that He can make beauty from ashes. Here’s my short bio:

Born and raised in Vincennes, Indiana, Jamie is the daughter of a preacher man. Road trips with her dad—to and from Bible studies across Indiana—were filled with talks of things beyond earth’s bounds – creation and the fall, God and Jesus and the rapture, the earthly walk compared to the spiritual walk, and how we are born for more than what we can see or touch.

The highlight of those nights was stopping at a truck stop in the middle of the night where her dad would spend a little of the offering basket on two slices of pie and a couple of Cokes. Nothing ever felt so special as a middle of the night slice of pie with her dad. And nothing could stop the writing pouring out of her.

Jamie and Tony have been married for twenty-four years and live in Indianapolis with their three sons, a giant of a dog named Leo, and their new addition – a half Siamese/half Snow Shoe kitten named Luna.

If she could only say one thing to her readers it would be, “Live the dreams God has destined you for!”

9. How can readers connect with you to learn more about your other projects or get in touch with you?

Pride and Prejudice! I’ve seen the movie at least a dozen times. I love Sense and Sensibility and Emma too though. Now, you’ve done it!! I’m going to be craving some Jane Austen and have to squeeze that into my schedule!

Thanks again to Jamie Carie for stopping by and sharing her story. Be sure to leave a comment to be entered it the giveaway for the winner’s choice of a book in the Forgotten Castles series!