The “Traditional” Regency is a subgenre of the historical romance field whose style, tone, and mores were imitated by and solidified by Georgette Heyer and followers like Clare Darcy, Marion Chesney, and after that so many great authors I still read again and again such as Carola Dunn, Jo Beverley and her early books, Kasey Michaels, another favorite, I could go on and on. These are comedies of manners, which doesn’t mean they’re funny, though the tone is generally fast-paced and lighter than historical romances. These books were squeaky clean. If a couple was married or even indiscreet beforehand, we received no graphic details about their relationship. At one time, about the time I got interested in the genre, every publisher had a traditional Regency line, including some smaller presses. Regency readers were smart, savvy, and up on the time and details of the Regency.

Then the genre died. Door after door closed to the traditional Regency. Those of us who preferred it to the steamier replacements were reduced to reading our old books over and over again, or giving in and just skipping a few pages here and there.

But why did this happen?

Yvonne of the Regency information web site http://hibiscus-sinensis.com/regency explains the problem with a story about something that happened in Sweden, her home country, in the 1930s.

“Back in the 1930s there were two toothpaste companies that basically shared the market. The bigger brand had about 70% of the market and the runner up 30%. The most popular toothpaste had mint taste, not surprisingly, while the other had cinnamon. Market researchers told company #2 to switch to mint also, since it was the more popular taste. So they did. But… People that liked mint toothpaste still bought brand #1, while all those that had bought the cinnamon tasting toothpaste certainly weren’t interested in mint. Company #2 folded due to lack of sales.

The bottom line: Publishers never understood, or rather, wanted to accept that Regencies, like cinnamon toothpaste, are a niche market. Not even in their heyday did they appeal to the general mass market.”

Some claim authors gave into reader and/or publisher demand for steamier love scenes. Some claim the stories got too hung up on historical facts and not enough on character and story. Still others say the problem lay in too much inaccuracy in the stories and readers got disgusted.

Although all of the above are contributing factors, the bottom line is what is usually the situation in business—the bottom line in the accounting books. The traditional Regency just did not sell enough books. Authors moved on to bigger books for which they could get higher advances and more room for character and plot development. 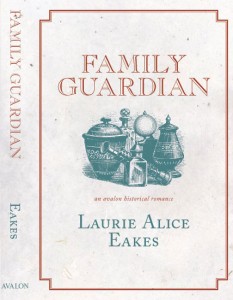 Yet readers still wanted—still want—the traditional Regency. Thanks to digital books and the Christian market, readers can get them again. Many of the authors of the traditional Regency have gotten the rights to their books and made them available through Amazon and other e-book venues. My first Regency was sold to the family friendly–translate squeaky clean—Avalon Books. Family Guardian won the National Readers Choice Award for Best Regency in 2007 (and may end up available digitally now that Amazon owns Avalon). That opened the door for me to sell Regencies in the Christian market. Many others have come along, too. Love Inspired publishes Regencies on a regular basis.

My bottom line on this is that readers are the driving force and will cry out for cinnamon instead of mint until someone makes it available.

(My thanks to the ladies on the Regency fans Yahoo group for their input on this subject and for Yvonne for giving me permission to quote her.)